I was born in April 1978 in Meerane (Saxony) as Clemens Ohl. After my family left for West Berlin in 1984 (by requesting an emigation permit), I discovered my love for music. In addition to my artistic skills, as a Waldorf student, my manual skills and creative inspiration were promoted at an early stage.

My first instrument which I was allowed to learn was, how should it be otherwise, the violin. However, I later switched to the saxophone, which still accompanies me today. My preference is improvisation.

After I experienced various occupations for a while (for example as a Velotaxi driver and as a seller in a music shop), fate or whatever, brought me to the idea of ​​combining my skills in a final profession.

Lothar Sandner and Sven Gerbeth taught me the traditional – musical craftmanship of violin making at the famous Klingenthal (Vogtland) Vocational School. I was able to gain further experience in the workshops of Michael Ledfuß & Friederike Dudda (Halle). I also worked with Matthias R. Misch  (Erfurt).

To avoid confusion, a short explanation for my surname. I owe this to a long past marriage from the time I lived in Berlin. It belonged to a Mexican woman and since then it also belongs to me. 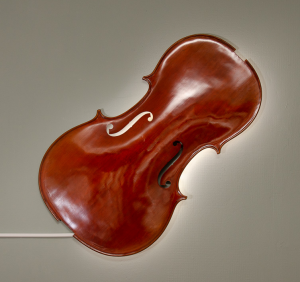